How to get to Hong Kong Island

With a extensive road and rail network every part of the island can be reached by the very economical red Taxis, the modern underground MTR railway system or the efficient air-conditioned double-decker yellow busses. Don't forget the Victoria Peak Tram and you'll find every type of transport you need here. And with many of the most important parts of Hong Kong grouped together on the north cost of the Island much is in easy walking distance via the network of elevated walkways and escalators.

For those people staying on Kowloon side the trip to Hong Kong island is easy and can be done in several different ways. There are 3 road tunnels, two rail tunnels and many ferry routes that connect to two sides of Victoria Harbour.

The MTR railway system connects most places in Hong Kong and is generally the most efficient way to cross the harbour. From Tsimshatsui station near the tip of Kowloon peninsular to Admiralty station is only one stop and about 5 minutes, for such a short trip more time is spent walking inside the large stations than actually on the trains. 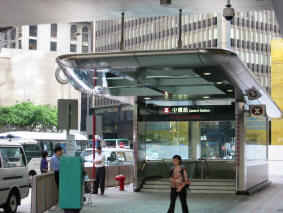 If travelling from further north in Kowloon, such as Mongkok or Jordan, and going elsewhere on the Island such as Causeway Bay or Sheung Wan then the MTR is still a great choice. The main north-south Tuen Wan line runs through the heart of Kowloon, crosses the harbour and lands on Hong Kong island at Admiralty, then turns west to Central where it stops.

Change trains at Admiralty or Central to the Island line to access other parts of Hong Kong island which lie along the north coast and are connected as far as Chai Wan in the east.

A great alternative is to take the Star Ferry across the harbour, this iconic 5 minute sail is one of the highlights of any trip to Hong Kong and continues to serve both the local population and the many visitors to Hong Kong today as it has for 100 years.  The Star Ferry pier on Kowloon is right at the tip of the peninsular and a 10 minute walk from Nathan Road.  Easily reached from East Tsim Sha Tsui by following the Kowloon promenade, with it's magnificent views across the harbour of Hong Kong Island, it is a good choice early in the morning before it is too hot, or in the evening when the city lights sparkle across the water.

There are actually two ferry routes operated by Star Ferry across the harbour, the one most often taken is from TST to Central where it lands at Pier 8 just a short walk by elevated walkway to the IFC mall and from there into the busy business district, or down into the MTR station.

However a less frequently used route runs just as often and takes you to Wanchai pier on Hong Kong Island. This is a great route if visiting anywhere in Wanchai, particularly the Hong Kong exhibition and convention centre with it's Golden Bauhinia monument just outside. The ferry pier is just across the street from the convention centre.

To Lantau from Hong Kong Island

To Macau from Hong Kong Island

From the with everything from street foods in to Michelin Star dining just in the Central business district alone, and with fresh seafood in Aberdeen beside the harbour while Japanese snacks and foods are to be found in Causeway Bay, and of course Dim Sum everywhere, there is no one "Hong Kong island food" as such, but there are certainly highlights and things not to be missed.

Here then are some of those choices, from the well known to the obscure, from 5 star hotels to off the beaten track delights, try some of these then strike out on your own and try something you haven't tried before!